The annual October showdown at Winthrop University in Rock Hill, South Carolina – what some call the Super Bowl of disc golf – came and went. As always, there were out-of-bounds lines, water, and high risk shots as well as the iconic and treacherous hole 17 that meant the tournament truly wasn't over until it was over.

It was the U.S. Disc Golf Championship (USDGC), a PDGA Major.

From Thursday, October 6 to Sunday, October 9, 2022, the best disc golfers in the world vied for the coveted title of U.S. Champion. Like in 2021, the USDGC will ran alongside a women's only event at Winthrop dubbed the Throw Pink Women's Disc Golf Championship (TPWDGC).

Learn more about the USDGC and the Throw Pink Women's Disc Golf Championship below (click/tap any bullet point to jump to that info):

If you'd like to see every USDGC champ, which players have made the top 10 most often, and plenty of interesting trivia, check out our post "All USDGC Winners & Runners Up + Most Top 10s."

You can find shot-by-shot scores, stats, and more for the 2022 USDGC on UDisc Live.

You can find shot-by-shot scores, stats, and more for the 2022 TPWDGC on UDisc Live.

You can find individual scores on every hole, in-depth stats, and more at the UDisc Live results page for the 2022 USDGC.


Gannon Buhr with a score of 33-under par

Who were second and third at the 2022 USDGC?


2nd  Niklas Anttila with a score of 32-under par

3rd  Calvin Heimburg with a score of 29-under par

You can find individual scores on every hole, in-depth stats, and more at the UDisc Live results page for the 2022 Throw Pink Women's Championship.


Catrina Allen with a score of 16-under par

Who came in second and third at the 2022 Throw Pink Women's Disc Golf Championship?


2nd Kristin Tattar with a score of 13-under par

3rd Henna Blomroos with a score of 12-under par

Prior to the start of the 2022 USDGC and TPWDGC, these are the players UDisc Live's pro disc golf Win Probability model gave at least a 2% chance at victory:

On mobile, swipe left/right to see all columns.

These percentages were created prior to the start of the event and will change dramatically as the event plays out. To see how, click or tap the Win Probability tab at the top of UDisc Live.

Note that Win Probability doesn't always match up with Disc Golf World Ranking because Win Probability takes into account how players have historically performed on holes of specific distances and difficulty and compares that information just to holes they'll face at a single event. That means the numbers above related to how players' historical performances suggested they'd do just at the 2022 USDGC or TPWDGC whereas World Ranking is a broader assessment of past performance.

Some consider the USDGC the most prestigious disc golf event in the world, believing it surpasses even the PDGA Professional Disc Golf World Championships.

1997 was first time disc golfers got to see what Winthrop University in Rock Hill, South Carolina – the host of every USDGC – would look like when set up to challenge the world's best. That year, the Pro World Championships were in Charlotte, North Carolina. Rock Hill is only a half hour drive from Charlotte, and the Winthrop University course was chosen to host the final round of that tournament.

Poole and other legends of the game saw an opportunity to do something special in Rock Hill each year.

"The Worlds would have a great year, a good year, then a not-so-great year, and then another great year," Poole said. "We weren't seeing the consistency because it's very difficult for a club or promoter to take on an event of that size."

With Worlds moving to a new area of the country each year, expectations were always high but there was a lack of dependable quality.

"It was all a club could do to simply handle the logistics, let alone promote the tournament and handle the media and sponsorships," he said.

So, in 1998, Poole and the future USDGC staff proposed adding another PDGA Major. It would be unique in the fact that it would never move around and would be played at the same course year in and year out.

"The origins of it were to have an event that could stay in one spot," Poole said. "That way we can learn and get better at producing this event."

The USDGC was designed with the idea of having a one-division tournament. No men's, women's, age-protected, or amateur divisions – just one field of competitors all playing the same course to showcase the greatest disc golfers in the world.

"We wanted to create an Open," Poole said. "That way anyone who could qualify could compete together."

In 2000, the event added the Women's National Event (renamed the U.S. Women's Disc Golf Championship or USWDGC in 2001) for the Open Women field but moved on from that idea after just two years.

"It was getting overshadowed," Poole said. "The USWDGC had a lot of potential, and to reach its potential it needed to move out and move around the country and grow on its own, which it eventually did."

From 2002 to 2019 the only women competing at Winthrop were those who qualified for the USDGC. But in 2020 a women's event at Winthrop re-emerged. The roving USWDGC had been cancelled due to COVID-19, so an elite women's event was organized to run alongside the USDGC – in many ways a replacement for the cancelled USWDGC. In 2020, the event was again called the Women's National Championship.

In 2021, the event turned into the Throw Pink Women's Disc Golf Championship and remains under that title in 2022. Just like those playing the USDGC, competitors have to qualify for their spots, generally by placing well at an elite tournament.

Partnering with disc golf non-profit Throw Pink, the TPWDGC features 40 of the top women disc golfers in the world and will raise money and awareness for the fight against breast cancer during Breast Cancer Awareness Month.

"It was a homecoming," Poole said. "We thought if we were going to go through this much effort to get the course ready, along with all the media and fanfare that surrounds this, it felt like the thing to do to create a women's event of some kind."

Notably, major portions of the money raised from the pay-per-view broadcast have been donated to charity. The tournament has donated around $400,000 to charity over two decades.

Additionally, money from the pay-per-view has gone directly back to the players through the payouts. The total purse in the history of the USDGC is over $1.2 million.

"It's the players that are driving the show and I feel like they should have a cut of that," Poole said.

Here are some of the standout moments from past USDGCs.

The USDGC was designed to be a single-division tournament featuring the best in the world. The best amateur, the best women, the best age-protected men, the previous deaf national champion, and anyone else who could qualify through high finishes at events throughout the year were invited.

In 2001, the best woman on the planet was Juliana Korver. She was just coming off her fourth consecutive PDGA World Championship. In fact, dating back to May of 1998, she hadn't placed outside the top two in the Open Women division. As that year's world champion, she received an invite to the 2001 USDGC.

Korver averaged 997-rated golf across her four rounds to tie for 50th place in a 123-player field, finishing with the likes of future multi-time Open World Champion and one-time USDGC champ, Nate Doss. Her 50th place finish was enough to cash, making Korver the first woman to cash at the event. Additionally, she remains the only woman to ever cash at the USDGC period.

It was 2003, the fifth anniversary for the USDGC. Ken Climo had won three of the first four iterations and was the reigning champion while Barry Schultz was the only player not named Ken Climo to have a USDGC title to his name. Climo was in the height of his greatness and Schultz was coming off his first World Championship. The two had been battling for years, and it would continue at this tournament.

Climo had control of the tournament during the final round. Despite Schultz's quick start, Climo was able to extend his lead to six strokes with just seven holes to play.

A double bogey on hole 12 – plus a few pars and some OB on the ensuing five holes – opened the door for Schultz who was ready and waiting. The two heavyweights stepped up to the infamous hole 17 island deadlocked for first place.

They both found birdies on holes 17 and 18, with Schultz knocking down a treacherous outside-the-circle downhill putt on the final hole to force a playoff.

The USDGC playoff scenario is unique because the players play holes 18, 1 and 17 in a loop until a winner is crowned. Climo and Schultz went through the loop three times during the playoff (notably teeing from a much less-treacherous position on 17 than in recent years), birdieing every single hole and giving the crowd a spectacle of disc golf excellence that will be hard to ever match again.

Finally, on their fourth time around the loop, on the green of hole 18, Climo missed a putt and Schultz tapped in to cap off his historic 2003 season. You can watch footage of this epic playoff in a piece from Ultiworld Disc Golf.

Paul McBeth won his first career USDGC in 2015, and it was a win that was historic for other reasons, too.

In 2015, the disc golf world had five majors: the Aussie Open, Scandinavian Open, European Open, World Championships, and the USDGC. If you include the team-based Presidents Cup pitting Team USA against Team Europe (a PDGA Team Major), that would be a sixth major. No player had ever won every major.

McBeth won them all, even the Presidents Cup as part of Team USA, earning him disc golf's first-ever Grand Slam.

Gannon Buhr's 2022 USDGC victory wasn't out of the blue. Despite still being in high school and having just two seasons on the pro circuit under his belt, Buhr had made it clear he was one of the world's best disc golfers with consistently great showings at the sport's biggest events.

Still, seeing a 17-year-old take down a tournament that had the most stacked field imaginable, which rivals the World Championships in prestige, and was played on a course that required a rock solid mental game to master was unexpected to say the least. The win makes Buhr the youngest player to ever win the event.

You can learn more about this young man's path to disc golf stardom in our post "Gannon Buhr: Background & Disc Golf Career So Far."

The 2022 USDGC was broadcast exclusively through the Disc Golf Network (DGN). DGN subscribers get the content for free, but there is also a non-subscriber pay-per-view package available.

Unlike Disc Golf Pro Tour tournaments, the final round of the USDGC will not be broadcast for free on YouTube.

No. The Disc Golf Network/Disc Golf Pro Tour is the only entity producing coverage of the USDGC in 2022.

How to Watch the TPWDGC

The 2022 TPWDGC will be broadcast exclusively through the Disc Golf Network (DGN). DGN subscribers get the content for free, but there is also a non-subscriber pay-per-view package available.

Unlike Disc Golf Pro Tour tournaments, the final round of the TPWDGC will not be broadcast for free on YouTube.

No. The Disc Golf Network/Disc Golf Pro Tour is the only entity producing coverage of the TPWDGC in 2022. 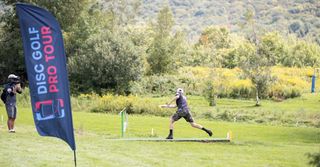 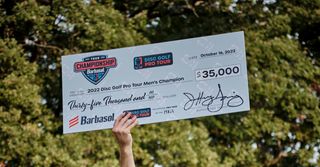 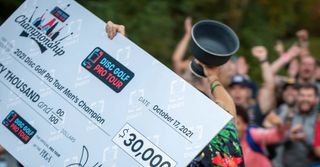 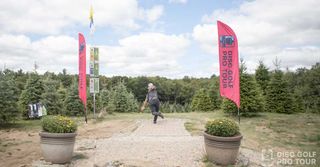