The Best Disc Golf in the Southeast

Charlotte, North Carolina, is the fourth best metro area for disc golf in the United States.

It's historical fact that in 1780 during the U.S. Revolutionary War the British General Cornwallis and his troops rode into Charlotte and encountered resistance from a small group of rebels. However, what some of the city's history-loving residents take pride in is the unverifiable legend that the group fought so ferociously that Cornwallis dubbed Charlotte "a hornet's nest of rebellion" (this is where the NBA team’s name comes from).

Whether the legend is true or not, there’s no doubting that the Charlotte disc golf community has grown the sport with all the buzzing energy of an insect swarm. The metro area currently boasts over 70 courses. The quality of these courses is attested to by how many high-caliber pro disc golfers – e.g. Jeremy "Big Jerm" Koling, Kevin Jones, Paul Ulibarri, Holly Finley, Michael Johansen, and Paige Shue – currently call the area home.

Below you can learn about the past and present of disc golf in the Queen City, including closer looks at some of the best disc golf courses in and around Charlotte, where to get disc golf gear in the area, and how to find leagues and tournaments. We also give recommendations for great places to get a bite to eat and wet your whistle after you've hit enough trees for one day and off-the-course attractions.

The Top 10 Disc Golf Cities – U.S.A. rankings are based on the number, quality, and density of courses within nearly 400 metro areas in the country. The rankings are based entirely on stats and not the personal preferences of anyone at UDisc.

If you'd like to learn more about the system behind these rankings, give "How The 2021 Top 10 Disc Golf Cities – USA Rankings Worked" a read.

Until recently, many of the milestones along Charlotte's road to its current undisputed status as a disc golf wonderland were associated with Professional Disc Golf Association World Championships (often referred to simply as Worlds), which is a roving tournament hosted in a different location each year. Charlotte has hosted the professional Worlds more than any other city: three times.

Back in 1986, Charlotte didn't even have a permanent disc golf course with baskets, but it still managed to host the fifth-ever Worlds by setting up portable targets in three area parks. The event helped local disc golfers build their relationship with the parks department, smoothing the way for the installation of permanent courses.

The first baskets went in the ground in 1989 at Reedy Creek Disc Golf Course, which was designed by local legend Stan McDaniel.

Another important event in the Queen City's disc golf saga that shortly followed the '86 Worlds was the opening of Innova East in Rock Hill, South Carolina, just south of Charlotte. Innova was one of very few disc golf equipment manufacturers at the time and is still one of the largest and most popular today. Innova East came to be because company co-founder Harold Duvall (the defending World Champion at the '86 Worlds) moved to the area from California in the late 1980s, and the business' presence has catalyzed disc golf's growth in the region ever since.

By the time Charlotte hosted Worlds again in 1997, it had a few more permanent places to play, such as Kilborne, which was installed shortly following Reedy in 1991. However, the true course explosion came in the lead-up to the 2012 Worlds, which the area's course designers, club members, and parks department began prepping for six years ahead of the event. Thanks to the work of Aaron Shindledecker, you can hear that story straight from someone who helped organize the 2012 Worlds in the documentary First in Flight: The History of North Carolina Disc Golf.

The video below is preset to start and stop at relevant sections and goes for roughly two minutes, but the whole thing is worth a watch for anyone interested in North Carolina disc golf.

If you don't have a chance to watch the clip, the gist of it is that leaders in the Charlotte disc golf community got the parks department on board with building a huge number of new courses in order to make it ready to host a mega-sized Worlds. Innova East helped make it all possible by giving the Charlotte Disc Golf Club a flexible, no-interest payment option for all the baskets they needed.

The infrastructure built to accommodate that 2012 Worlds turned Charlotte into one of the nation and world's top disc golf destinations and has also helped more and more people in the region discover and enjoy the sport over the years. The enthusiasm hasn't died down, and the metro area just keeps getting more courses (as well as refining the older ones). Charlotte Disc Golf Club Director of Operations Mark Huether said there are currently over five courses in the planning stages in the area as of the end of 2021.

What you can anticipate from classic Charlotte disc golf is simple: trees. If you like wooded courses that demand accuracy and typically punish errant shots with bad lies rather than out-of-bounds strokes, Charlotte will be your paradise.

However, don’t think that the courses aren’t differentiated just because woods are the norm. The rolling hills in the area offer a wealth of elevation changes. And with the minds of three-time Masters World Champion and Disc Golf Hall of Fame member Stan McDaniel and 2018 Amateur Masters World Champion Mark Huether being behind or influencing many of the area's courses, it's no wonder that they challenge a wide variety of skills.

Another Round Disc Golf is Charlotte's most popular dedicated disc golf shop. Located in the hip NoDa district, Another Round is not only fully stocked with gear but also has rotating taps pouring craft beer from some of Charlotte's many excellent craft breweries.

You also won't go wrong hitting a Play It Again Sports, a franchise that sponsors many events in the area. The shops in and near Charlotte often carry plenty of discs and tend to have staff who know a thing or two about the sport.

Another Round isn't the only business mixing disc golf retail with another draw. Cloud 9 to the east of the city has a good disc golf selection and is also a smoke shop. Additionally, it's not far from the well-reviewed Scrapyard Disc Golf Course and right beside a little 9-hole course. To the north, there's Mighty Meeple, which specializes in disc golf and board games and is just fifteen minutes from the excellent course at Bradford Park.

The Charlotte Area Disc Golf and Charlotte Disc Golf Facebook pages are great places to find locals willing to give tips and/or meet up for rounds.

Chow Down & Drink Up in Charlotte

After battling the hills and woods of Charlotte’s courses, there’s little better than a good meal and – for those who partake – a good beer. There are many awesome craft breweries, but two that regularly support disc golf are Lenny Boy Brewing Company and Olde Mecklenburg.

Lenny Boy hosts Charlotte's putting league and has a plethora of drink options. It has lagers and ales dark and light, some straightforward traditional European styles and some familiar recipes with modern twists. The brewery also does sour and wild ales. Not a drinker? Lenny Boy makes its own organic kombucha with creative flavors that you can get on tap. There's a selection of sandwiches and pretzels to have with your drinks, too.

Olde Mecklenburg (OMB) is the oldest craft brewery in Charlotte, and it makes standard German styles. OMB's Copper – which is based on the Altbier style found almost exclusively near the German city Düsseldorf – has been a staple on Charlotte-area beer lists for a long time now. The beers aren't as adventurous as Lenny Boy's, but the menu is more extensive. There's German-inspired fare as well as burgers, a pulled pork sandwich, and more. In warmer months, you can enjoy the brewery's large outdoor beer garden.

For barbecue, the Midwood Smokehouse or the (pleasant) biker bar atmosphere of the area's several Mac's Speed Shops are solid options.

There's also an excellent sandwich shop right next to Another Round Disc Golf called NoDa Bodega, and shop visitors are welcome to pick up food there and enjoy it in Another Round with a local craft beer.

What Else is There to Do in Charlotte? 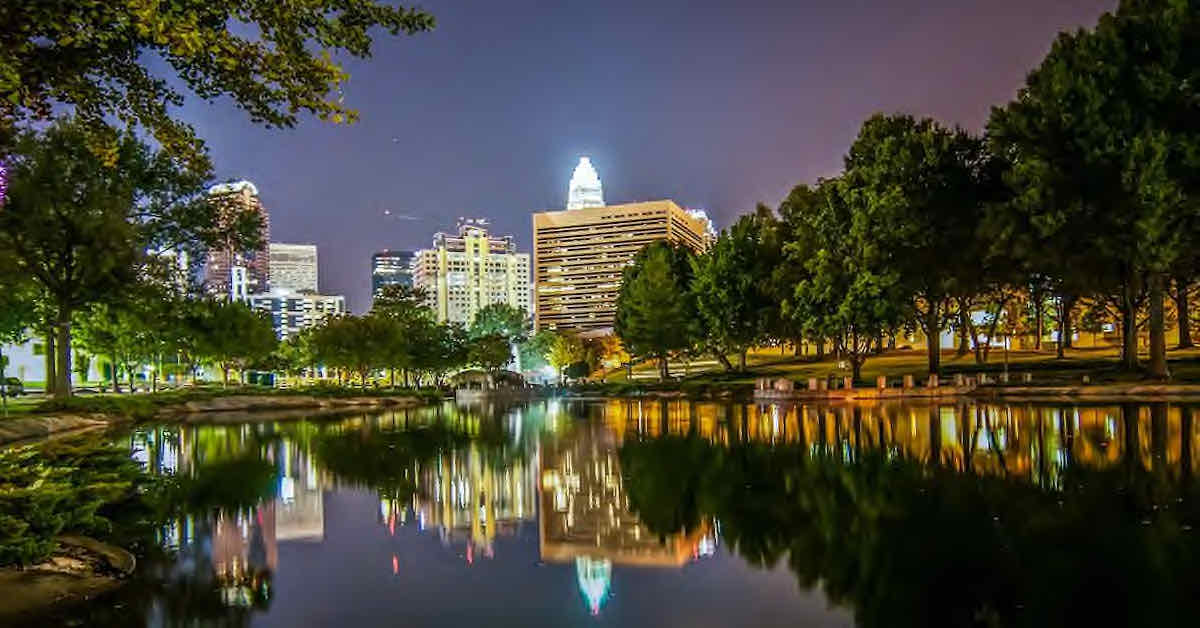 Special thanks to Charlotte Disc Golf Club board members Phil Cannon and Mark Huether for their help with this post.