Disc Golf Discs Explained: How & When To Throw Distance Drivers

This article focuses on distance drivers, but you can find the other articles in the Discs Explained series at the links below:

BEFORE WE GET TO DISTANCE DRIVERS...

For those who've recently read a different Discs Explained piece, we suggest scrolling to the DISTANCE DRIVERS EXPLAINED section as the information in the BEFORE WE GET TO.... section is the same across all articles.

Every disc is manufactured with a specific flight pattern in mind. When thrown flat some should go straight as an arrow (stable) while others should turn right (understable) or fade left (overstable). Discs with these intended flight patterns exist in every disc category we discuss in this series.

One way some manufacturers have attempted to concretely define the differences in discs is by using flight numbers. These are a set of four numbers that describe a disc's speed, glide, turn, and fade. We have an in-depth article on flight numbers here, but for this series it's most important to understand what's meant by "speed."

If you're interested in learning more about the physics behind disc flight, give this article a read.

Any pro disc golf fan has seen videos online of elite distance throwers smashing drives over 600 feet/183 meters. If you haven't yet gotten a glimpse of anything like that, here's an example of pro Eagle McMahon throwing a shot even with the basket on a 638-foot/195-meter hole from thediscgolfguy:

Under normal conditions, distance like that is certainly not coming from a putter, midrange, or even a fairway driver. Flights of that length call for a special kind of disc.

These special discs are distance drivers, the farthest-flying discs on the market for those who can release them with the speed they need. Keep reading to get a better understanding of these discs, including why they aren't always the best choice for players seeking max distance and why many players should steer clear of them entirely.

What Is a Distance Driver in Disc Golf?

Distance drivers are discs with wide, shallow, sharp rims and flat, aerodynamic shapes. They have the potential to fly farther than any other type of disc but players must have the power and technique to make them fly as intended. In most cases, distance drivers shouldn't be used for throws under 300 feet/91 meters.

Learn more about distance drivers below.

Distance drivers have a flat, sharp, and aerodynamic edge. This shape allows them to cut through the air and hold high speeds for a long time, meaning they can cover a lot of distance during their flights. The sharp edge and wide rim of a distance driver make them distinguishable from fairway drivers.

Some distance drivers have rims so wide that smaller-handed players can't grip them properly.

Distance drivers range from speeds 9 to 15. When thrown at the correct speed, their flight characteristics mimic that of slower discs, ranging all over in stability. However, when underthrown, distance drivers all become quite overstable and fade out quickly.

Another characteristic of distance drivers is they tend to take big skips when they make contact with the ground. This is because they tend to still have a lot of speed when hitting the ground, and their sharp edges and wide rims make them prone to skipping in the air and gliding some distance away from where they first hit.

The shortest distance most players should even begin thinking about a distance driver is around 300 feet/91.5 meters. Throwing them at a distance less than that could result in catastrophic skips that do more harm than good. A seasoned disc golfer with average power will generally max out around 400 feet/122 meters at most.

How Should I Throw a Distance Driver?

For players who can handle the speed of a distance driver, the suggested grip is called a “power grip.” For this grip, the thumb (on the topside of the disc) should be placed just inside where the rim begins to provide even pressure. The pinky, ring, middle, and index fingers are stacked together and wrapped tightly inside the rim. This grip takes more torque to release the disc properly and should only be used when throwing for power. If you have a distance driver in hand, chances are you are throwing for power.

To learn more about the power grip, we suggest taking a look at this article: "5 Great Videos: Disc Golf Grip (Backhand)"

“If you cannot get the high-speed driver up to speed, then you shouldn’t be throwing that disc,” said Carey. “Like all discs in our bags, the drivers can be a useful tool in the right hands.”

When Should I Throw a Distance Driver?

The correct answer is: When your technique is good enough to handle it. This thought was echoed by both Carey and Weir.

“It is hard to watch touring male professionals throw a 175-gram destroyer over 500 feet [153 meters] and not want to emulate them,” said Weir. “Understandably, this is not feasible for everyone.”

For many players, especially beginners, they recommended steering clear of distance drivers altogether and instead using a midrange or fairway driver until their arms and forms could harness both power and control.

Weir had a great tip for all beginning to intermediate players.

“Watch women’s coverage,” she said. “FPO [female professional open] players will likely throw with discs that are more similar in weight and type versus MPO [mixed professional open, but predominantly male] players. In addition, their distance off the tee may be a bit more realistic, as well as the shape of the shot required to get there. Instead of trying to throw sky hyzers like Simon Lizotte or 750-foot [229-meter] rollers like Eagle McMahon, watch Catrina Allen throw an upshot that lands right under the pin, or watch Kona Panis rip a backhand drive 350 feet [107 meters] and, by all means, watch Missy Gannon can a 50-foot [15-meter] putt.”

Situationally, there are four places to throw a distance driver.

The first is to achieve maximum distance. There comes a point when a fairway driver just won’t go any farther and to unlock the next block of distance, a powerful player needs a faster disc.

The second is to achieve maximum fade. When there is an obstacle, usually a tree or line of trees that a longer fairway bends around, then the most effective way to follow the bend of the fairway in one shot is with a distance driver because its overstable characteristics will allow it to fade around the corner better than any other disc.

The third is to fight the wind. In heavy headwinds especially, a midrange or fairway driver may not be able to cut through the wind properly with a predictable flight path. The sharp edge of a distance driver may be the necessary choice to minimize the impact of the wind on your disc.

The fourth is to achieve maximum skip. If the fairway requires a super sharp angle or a low ceiling prevents you from reaching a specific location with an air shot, throwing an intentional skip shot can get the job done. The wide rim and sharp edge of a distance driver can give you the predictable skip you’re looking for.

If you want to see some fun proof of a distance drivers' skip potential, check out Reid Frescura’s skip shot at the Ledgestone Insurance Open where he intentionally skipped an overstable driver off Lake Eureka to get himself a birdie putt on hole 17.

The top-selling distance drivers at online retailer Infinite Discs in 2019 were the Innova Destroyer, the Discraft Zeus, and the Innova Wraith.

The Destroyer was the first 12-speed disc ever made back in 2007 and is a great forehand disc for intermediate-level players as well as a great flip-up backhand disc for advanced power players.

The Zeus was new to the game in 2019, but disc golfers all over the world took a liking to it because of its consistent stability and, like the Destroyer, its effectiveness as both a forehand and backhand disc.

The Wraith is not only a top seller at Infinite Discs, but a staple in Weir’s bag. For her, this is the disc she pulls out for distance, relying on its predictable flight and superior glide.

“If I have a big, open fairway with no out-of-bounds or big obstacles, I’m reaching for my Wraith,” she said.

LEARN ABOUT OTHER DISC TYPES 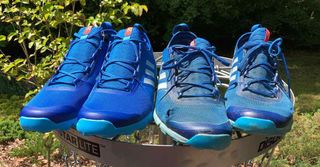 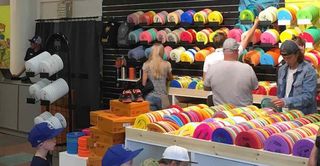 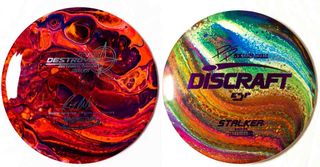